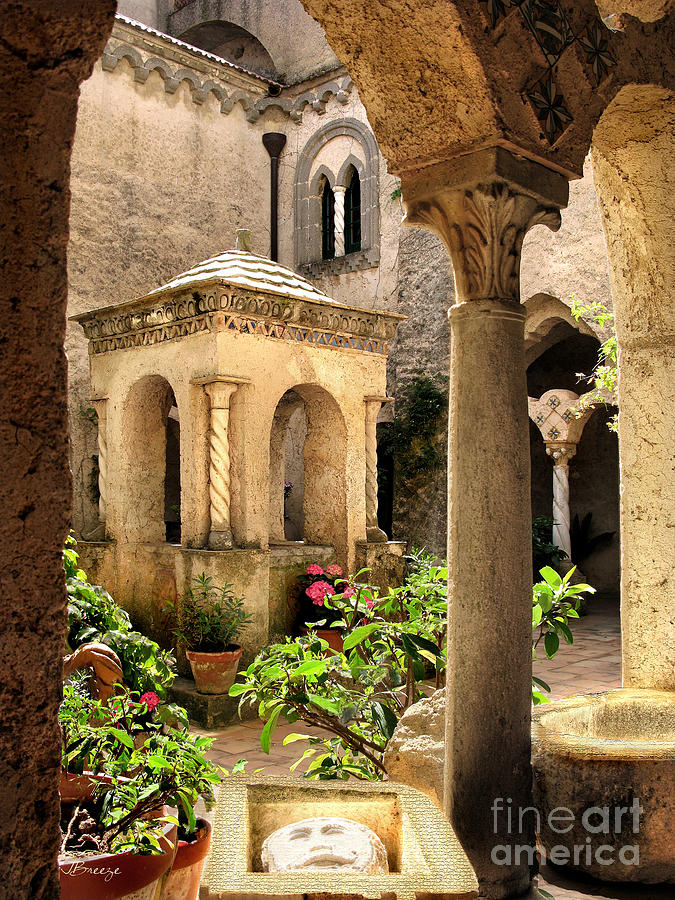 Award winning photograph presently showcased at the prominent Pizziera Ortica(awarded 2015 Best Italian Restauarant and Best Bar in Orange County) in Costa Mesa, Ca. Photo of Villa Cimbrone, which is an historic building in the hill town of Ravello, on the Amalfi coast of southern Italy. Dating from at least the 11th century AD, it is famous for its scenic belvedere, the Terrazzo dell'lnfinito (the Terrace of Infinity). Much altered and extended in the early twentieth century by Ernest William Beckett (later Lord Grimthorpe), the villa is today composed of many salvaged architectural elements from other parts of Italy and elsewhere; little of the original structure remains visible. Right at the edge of the crag there's a terrace commanding an enchanting view; it is surrounded by marble statues which, however, from afar, have an of appeal. The gardens were redeveloped by Beckett at the same time. The villa is now a hotel, its gardens open to the public. Villa Cimbrone stands on a rocky outcrop known as "Cimbronium", and it is from this landscape feature that the villa takes its name. The earliest references to the villa date back to the eleventh century AD, when the villa belonged to the Accongiogioco, a noble family. It later passed to the ownership of a wealthy and influential family, the Fusco, who are also recorded in 1291 as owning the local church of S. Angelo de Cimbrone.

Superb ArtShot Angle Jennie so Beautiful I love it !

Thanks for the 'beautiful' Aziza!

Wonderful photograph that welcomes the viewer to enter the scene! So well done, Jennie!

Appreciate the feature in your 1 A DAY WAITING ROOM art group. Thank you Frozen in Time Fine Art Photography!

Thank you Stefano! Honored to be featured in your 10 PLUS art group.

Excellent picture of this gorgeous place!

Featured in UNLIMITED CULTURE on 10.18.22. Fantastic color, texture, and architectural details in every direction.

enchanting place Jennie...thanks my dear friend for the visit and kind remarks, have a great day! ❤️

Thanks for the 'lovely' Morag!

Beautiful artwork! l/f your work and I would love to feature in UNLIMITED CULTURE if you'd like to submit!

Thanks for the referral and the 'beautiful' Katie! I'll have to figure out how to find the UNLIMITED CULTURE art group?

Thanks for the 'beautiful' Maria!

Thanks for the 'beautiful' Linda!

Thanks Nina! Appreciate the feature in your ART - IT IS GOOD FOR YOU art group.

Thank you very much Georgia!

Photo of Villa Cimbrone, this is a GEM! F

🎄Happy Holidays! Thanks to the buyer from Belmont, NC for the purchase of the Star Ornament of Villa Cimbrone, Ravello, Italy. Sweet!!! 🤩

Thanks to the buyer from Glendale, California for the purchase of my "Villa Cimbrone. Ravello'. Definitely one of my favorites!💟

“An art is a poem without words” Congratulations on your recent sale of this amazing Work!

Lovely image, Jennie. Congrats on being showcased at Pizziera Ortica. I learn so much from your descriptions!

Thanks for the 'awesome' Mike!