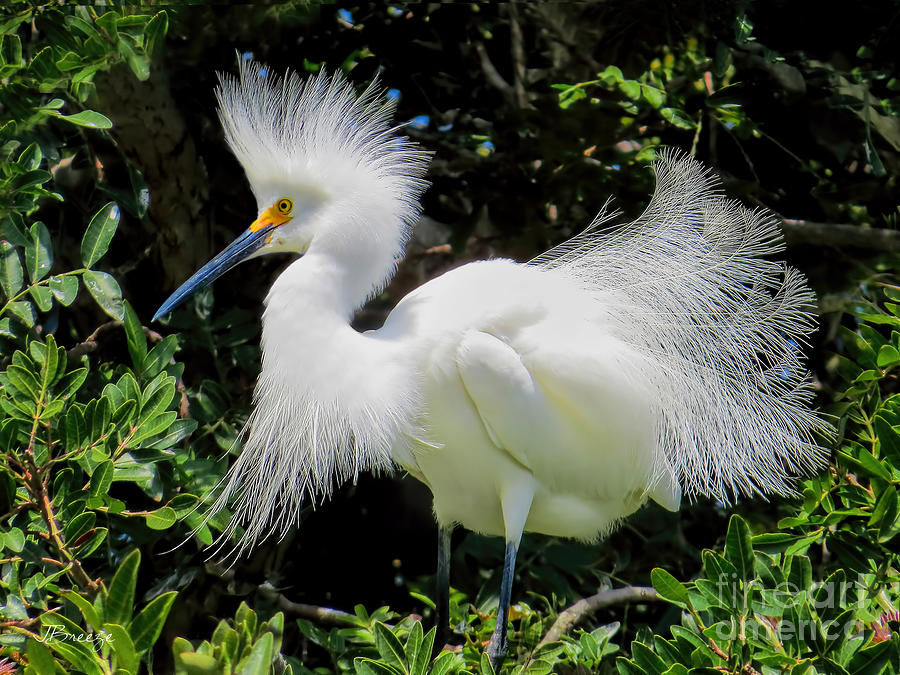 Snowy Egret (Egretta thula) in full breeding plumage. The striking color of the lores does not last long, and seems to occur at the very peak of the mating hormonal surge. This slender, medium-sized heron has white plumage, a slim black bill, long black legs, and vivid yellow feet. . It stands about two feet tall, weighs 13 ounces, and has a three-foot wingspan. Males are slightly larger than females. It has white feathers, a yellow patch of skin around its eyes, a black bill and black legs with bright yellow feet.Males and females look alike. During the breeding season, adults are adorned with long, delicate lacy plumes on their heads, necks, and backs; their yellow feet and lores (the bare skin between the eyes and bill) become redder. Their breeding habitat is large inland and coastal wetlands from the lower Great Lakes and southwestern United States to South America. They nest in colonies, often with other waders, usually on platforms of sticks in trees or shrubs. Their flat, shallow nests are made of sticks and lined with fine twigs and rushes. Three to four greenish-blue, oval eggs are incubated by both adults. The young leave the nest in 20 to 25 days and hop about on branches near the nest before finally departing.

Fantastic picture! Congratulations on your feature in 10 Plus. FL

Thank you very much Debby!

Thanks for the feature in your WILDLIFE ONE A DAY art group. Appreciate your support Mariola!

Thanks Stephano! Appreciate the feature in your 10 PLUS art club.

Thanks for the WOW Debra!

Wow what a beauty LF

Incredible capture of this beautiful bird! The detail is amazing!

great photo of this gorgeous bird!

Thank you very much Stephen!

Stunning capture of this beautiful Egret! Congrats on your features.

Perfect timing on this beautiful photo Jennie! Plus it's so difficult to get the white right in the sun but you did a wonderful job

Wow, such a perfect capture of this interesting bird F

Thanks Ukrainian Artists! Ukraine is always in my prayers.

Beautiful! Congratulations, Jennie, your wonderful image has been featured on "Fuzzy, Warm and Soft!

Thanks Phyllis! Great to be featured in your FUZZY WARM AND SOFT art group.

Thanks Barbie! Appreciate the feature in THE 200 CLUB art group.

Oh, such a beautiful capture of a stunning bird!!

Thanks Jamie! Appreciate being selected and featured in your ANIMAL PHOTOGRAPHY art group homepage.

Thanks Joe! Great to be featured in your WINGS art group.

Thanks Eve! A pleasure being featured in your BIRDS BIRDS AND MORE art group.

Thanks for the 'awesome' Ana Maria!

Thanks Duane! Appreciate being featured in your WILD AMERICA group homepage.